Humans relationship with the cat (Felis catus); has existed since the stone age, dating back as far as 9500 years ago. That is a long time for the cat, a clever and evolved creature, to work out where humans fit into their lifestyle; and they’ve worked it out very well.

In 2020 Australia, its estimated that 3.1million cats share this continent, many of which regularly couch surf.  Over a quarter of households own a cat and Australia has the highest desexing rate in the world.  Cats come in many breeds; the most common is the mixed breed, domestic shorthair, and it’s believed that the cats of today are descendants of the African wild cat.

In ancient times, cats were worshipped as Gods.  Fair to say they haven’t forgotten.

The African wild cat (Felis Sylvestris lybica) will eat several small meals per day.  Small birds and small mammals are high on the shopping list; however, considering their environment, much of their preferred diet is dictated by locality and season and not readily available all year round. Copping with an unpredictable food supply changes feeding behavioural strategies. These strategies have been inherited by todays domestic cats and may underlie much of the feeding behaviour of our house cats.

Food availability is major influencer of when and how much a cat will eat. Studies at WALTHAM indicate that when cats have constant access to an acceptable food, they will consume intermittent small meals over a 24-hour period. They prefer to ‘graze’ than gorge. Domestic cats naturally prefer many small meals at frequent intervals throughout the day. Feeding the required amount of food, split over several small meals per day, enables your cat to maintain its natural behaviour whilst maintaining a healthy weight.

“Many people prefer cats to other people.  Many cats prefer people to other cats.

So; what is the best feeding and food options for our feline housemates?

We need to consider a number of factors.
Firstly, cats are obligate carnivores, meaning they must have meat in their diets, preferably raw. They require the amino acid taurine, which is only naturally found in meat. Amino acid taurine can be destroyed when meat is cooked; raw meat is essential to ensure your cat is getting sufficient taurine.
Raw meat is high in protein and fats but does not equate to an entire carcass including organs and bones that a cat would eat in the wild.  Supplements are required. Yeast, kelp, lecithin, calcium and vitamin C provide the missing natural elements included in a live prey diet.  Cats also ingest grass and other green matter as part of their natural diet; accounting for this in the form of vegetables and wheat grass is a necessity.

Secondly, water intake is crucial.  Moisture is critical for the health of your cat’s urinary tract. Additional evidence exists that feeding cats a diet with a high moisture content can reduce the risk of weight gain and the health issues associated with obesity.

“I want to feed my cat fresh raw meat but how do I include the missing elements he needs?”

Vets all natural have developed “Complete Mix for cats and kittens” Complete mix is added to fresh raw meat. The Complete Mix formula is a carefully balanced, preservative free muesli style dry mix high in nutrient supplements containing all the essential vitamins, nutrients and minerals your cat requires for a long and happy life. Soaked in water before added to the fresh raw meat, Complete Mix also adds necessary moisture to your cats’ diet. 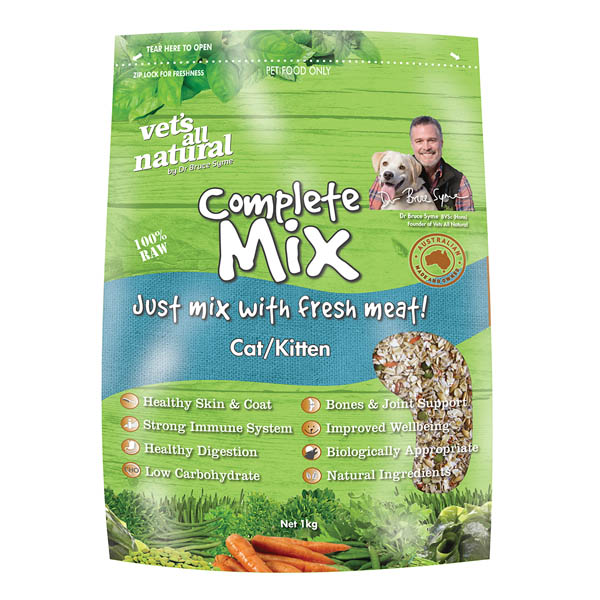 When transitioning your cat from a common dry food; a cat will nearly always reject a new food.  They tend to be neophobic, an evolutionary behavioural strategy common in many species. Neophobia is a fear of new things or experiences. Perseverance is required. Eventually your feline friend will be convinced that fresh raw meat is best for them.  When your cat is super fussy; soak Complete Mix in chicken stock mixing in a few sardines with the whole meal.  Get your cat used to eating raw meat first, add the mix gradually of a week or so.

Feeding a raw meat diet balanced with Complete Mix for cats and kittens; is the best thing you can do for your cat.

Our fully natural range of food and treats has a wide variety of products, catering for different areas of health and nutrition for dogs and cats.